After a rainy campfire kind of night, we put the car in neutral and headed down a mountain towards Takasaki, Gunma. We happened to roll past a grilled corn stand and happily stopped to look for some breakfast. The convenience stores are pretty swanky in Japan, but after a week, even the Seven Elevens can get tiring.

It was too early for grilled corn, but we noticed he had chilled tomatoes and cucumbers. So we bought some corn for later and sat down to a breakfast of veggies. I happily smiled at the ojiichan and told him his veggies were delicious in Japanese. He replied by asking me if I liked blueberries. They’re my favorite!

Comforted by our Japanese language skills, he began to tell us more about the area as he plopped a huge bowl of free blue berries in front of me. A troop of Elementary school children had gone up the mountain just yesterday and had bought a ton of corn. He showed us some crazy looking fruit that secretly hung in the vines near his patio furniture. We talked about his fish tank full of Medaka and I wondered why mine were so small in comparison. I told him the flowers on his table were beautiful and he replied with a Just like you. I turned to Twine. Did you hear that?

Yeah, yeah, he replied with his version of an eyeroll. Fingertips stained blue, we said our farewell and continued rolling down the mountain. 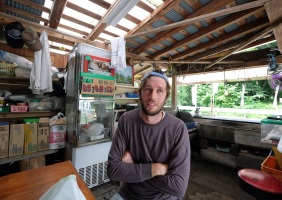